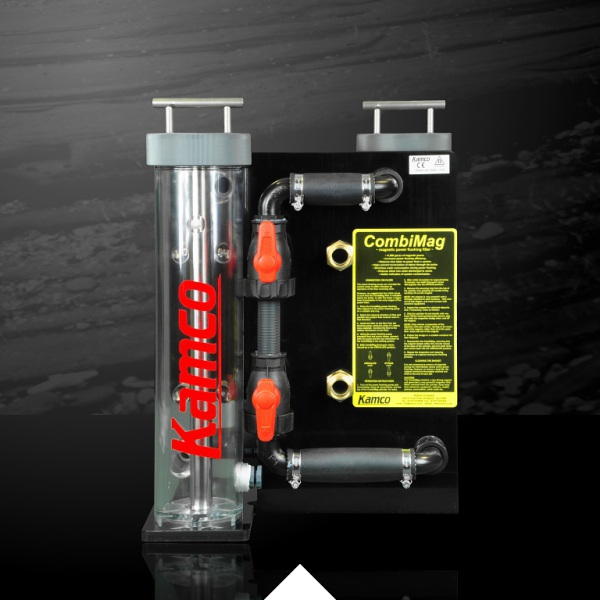 Need help or advice?
Simply call us on the number below...

TWIN MAGNETIC POWER FLUSHING FILTERS
Developed from the standard CombiMag for use on commercial heating systems, in conjunction with the Clearflow CF90 or CF210 power flushing pumps.

Removes magnetic debris from both flow and return at the same time, irrespective of the flow reverser direction setting.

During the power flushing process clear water is forced through a system, pushing debris ahead of it, and this continues until
the dump water finally runs clear. This may take a considerable time. The CombiMag Split Twin filter starts to remove circulating
black magnetic iron oxide contamination from the flushing water as soon as the power fl ush begins, using the power of two
rare earth magnets to extract the debris from the water.

The CombiMag Split Twin filter is installed between the power flushing pump and the heating system using the two
1.5m hoses supplied. The cyclone construction directs contaminated water through a powerful magnetic field, such that even the smallest of particles are retained on the central magnets, from which they may be easily cleaned during and after power flushing.
Collected debris, which may otherwise lead to blockages in smaller bore pipework, is prevented from re-entering the heating system. The rapid removal of debris from the flushing water prevents saturation of the cleaning solution with black sludge,
leading to a more effective power flush.

Debris retained on the magnet is an impressive visual aid. It demonstrates how much debris has been removed from the
system, confirms the need for the fl ush, and demonstrates that the clean has been professionally carried out.
Time savings on every job when using the Split Twin will rapidly cover its cost, reducing job time and consequent disruption.
The more effective cleansing process achieved when powerflushing with a CombiMag Split Twin filter reduces heating costs
and gives a more efficient heating system.